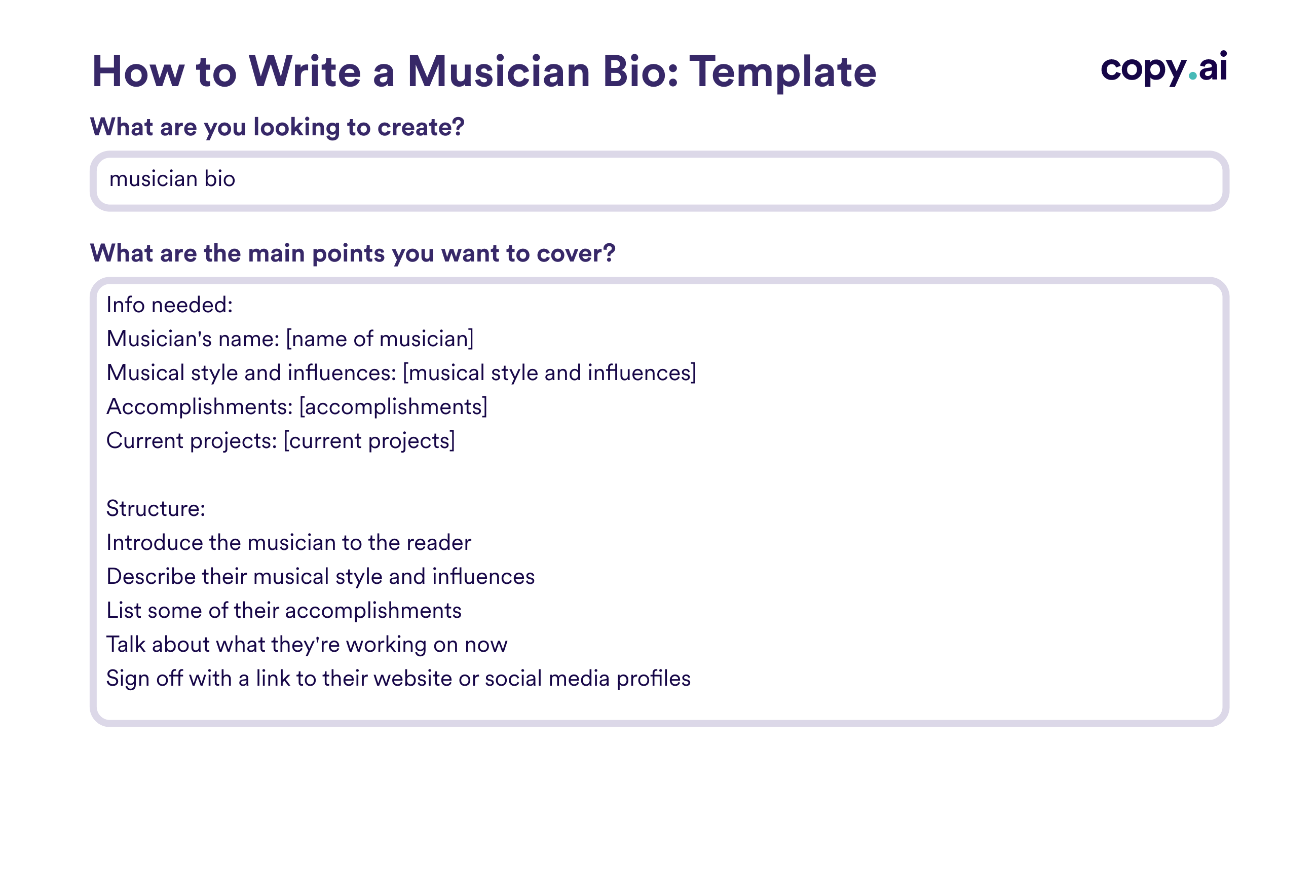 How to write a musician bio?

Need to write a musician bio? Here are 3 simple steps to get started:

1. Gather the information you need to know.

Before you write anything, you need to know who or what you're writing about. The more specific you are, the more personalized you can make your content.

Here's our suggestions for writing a musician bio:

2. Determine the structure of your output.

3. Write the content or use Copy.ai to help you get started. Once you have your structure down, you can start writing the content.

3 Examples of a musician bio

I've been singing and playing music since I was a kid, and it has always been my dream to share my songs with you.

I'm inspired by everything: my family, my friends, and even my favorite food—you never know what's going on in my mind when I'm writing a song! My style can range from quiet, soulful ballads to loud, upbeat pop songs that make you dance around. I love to experiment with different sounds and genres, so you'll never know what you're going to get when you listen to my music.

My current projects include an album titled "This Is Who I Am" that's going to drop on [date], with a single called "The Best Thing" coming out in [month].

I hope you'll check it out! You can check out my website at [web address].

Hey there! I'm [musician name] and I'm a [musician style].

Now I'm working on a new album called [album name], which is going to be a collection of songs inspired by [influential musician] called [influential song]. I'm so excited to bring this project to life!

Hello! My name is [musician's name], and I'm a [musician's style]. I've been lucky enough to have worked with [accomplishments], and I'm currently working on [current project].

I'm really excited to share my music with you. If you want to learn more about me or my work, you can visit my website at [website address].

Why should you write a musician bio?

1. A musician bio can help an artist to connect with their audience on a personal level.

2. A musician bio can help an artist to build a rapport with music industry professionals.

3. A musician bio can help an artist to create a unique and appealing brand.

Who needs to write a musician bio?

Where can I learn more about copywriting?

Check out our blog!

You can learn how to write a blog post or even see examples of good Instagram captions.

If you're looking to start a business, you can discover side hustle ideas (or small business ideas), learn how to create your personal brand, create a content marketing plan, and even how to sell Notion templates! 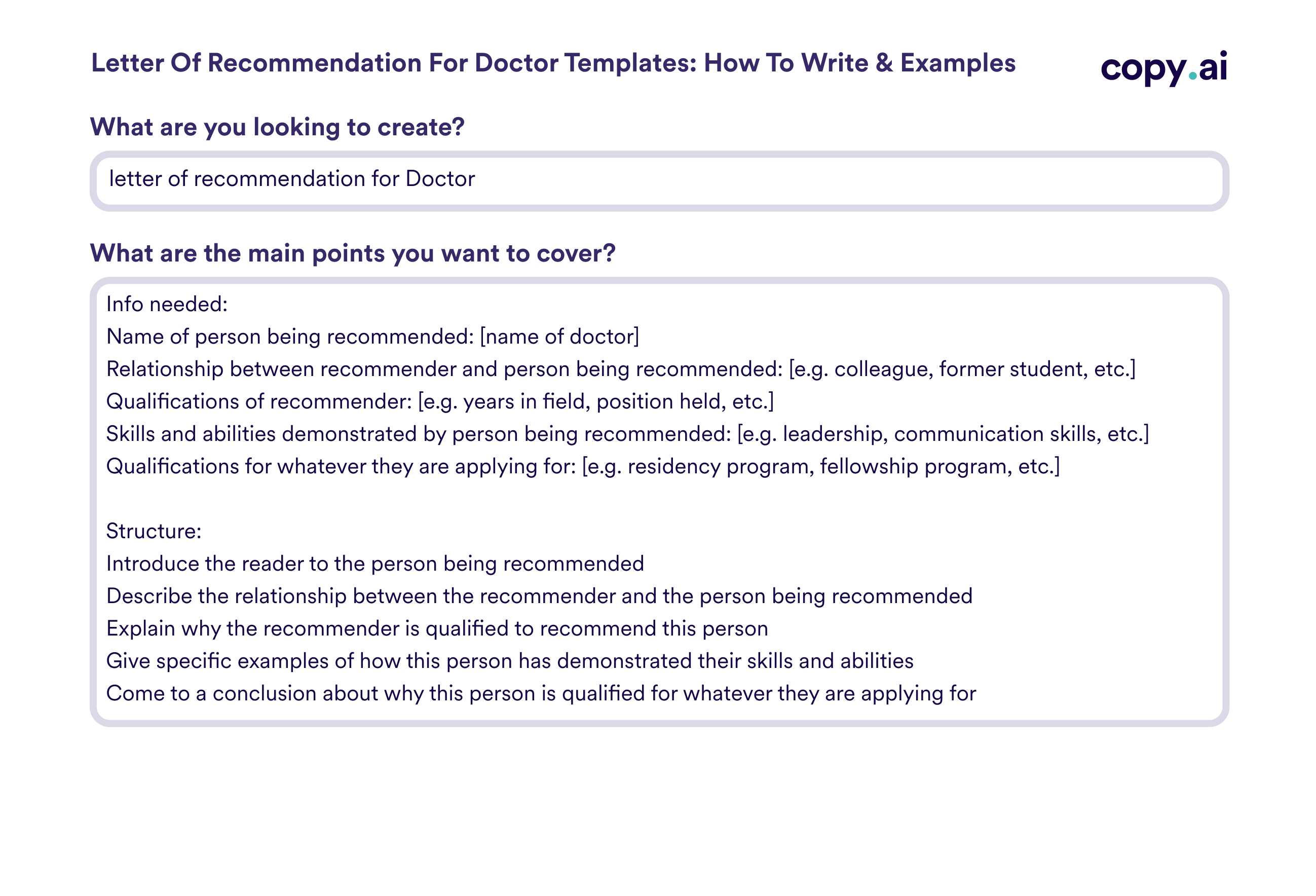 Letter Of Recommendation For Doctor Templates: How To Write & Examples 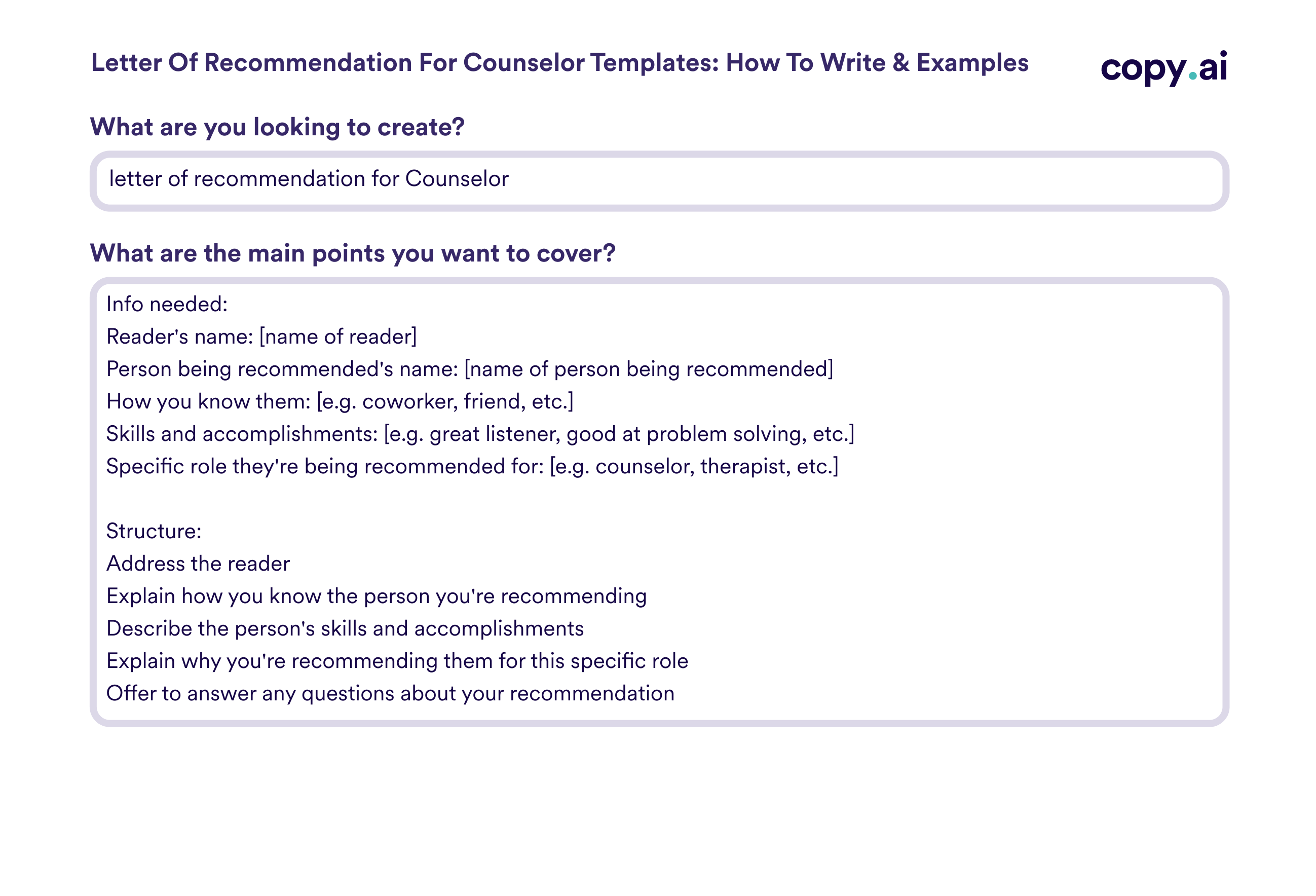 Letter Of Recommendation For Counselor Templates: How To Write & Examples 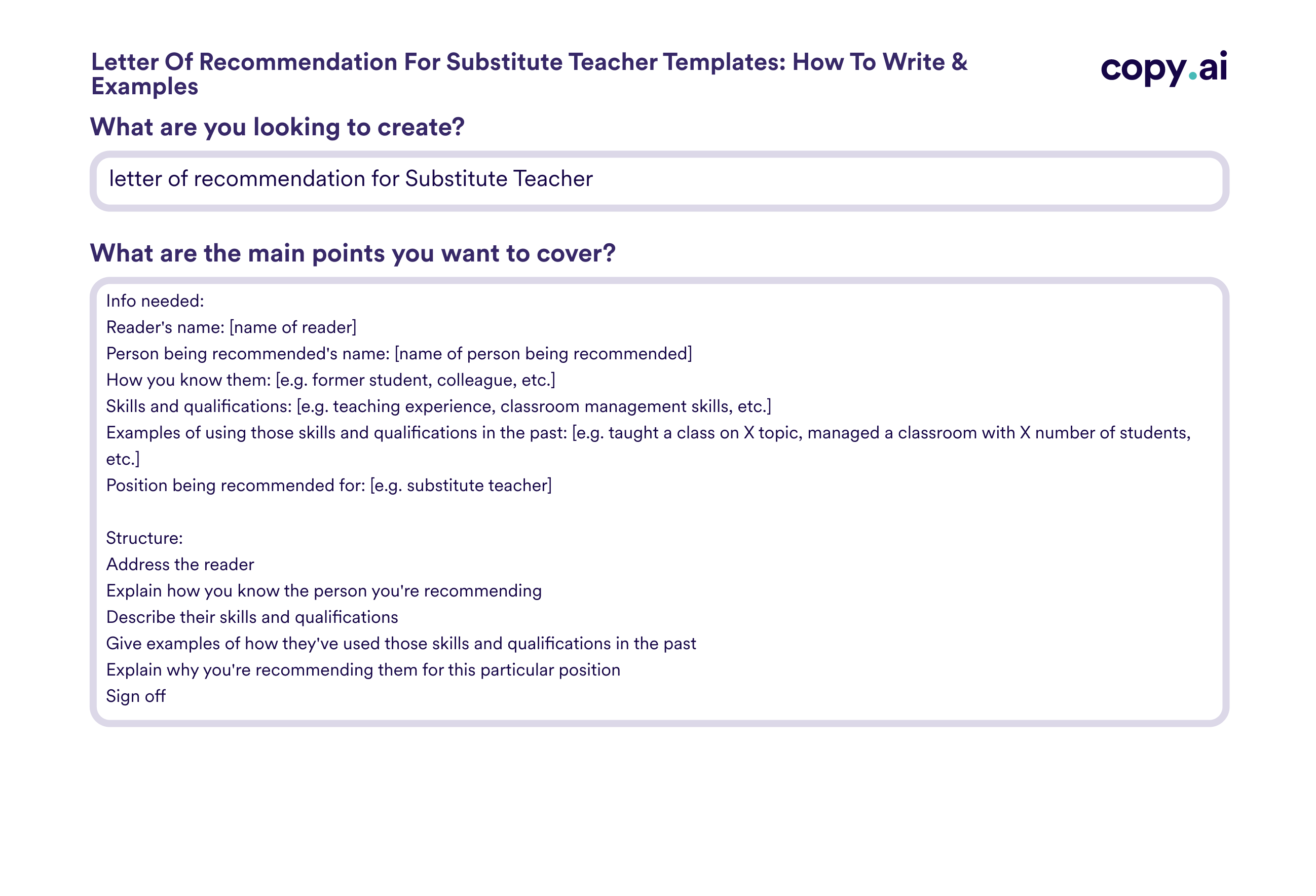 Letter Of Recommendation For Substitute Teacher Templates: How To Write & Examples 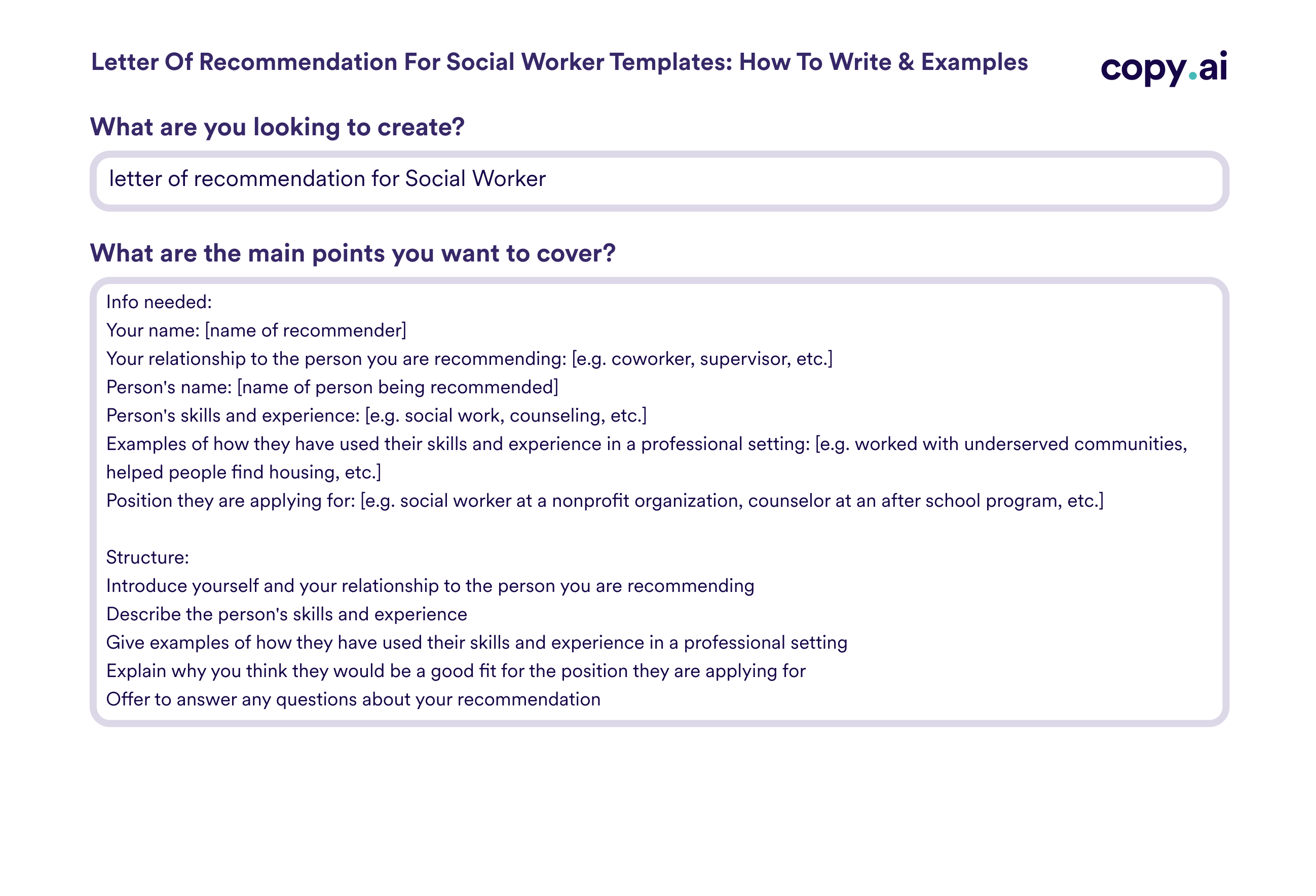 Letter Of Recommendation For Social Worker Templates: How To Write & Examples 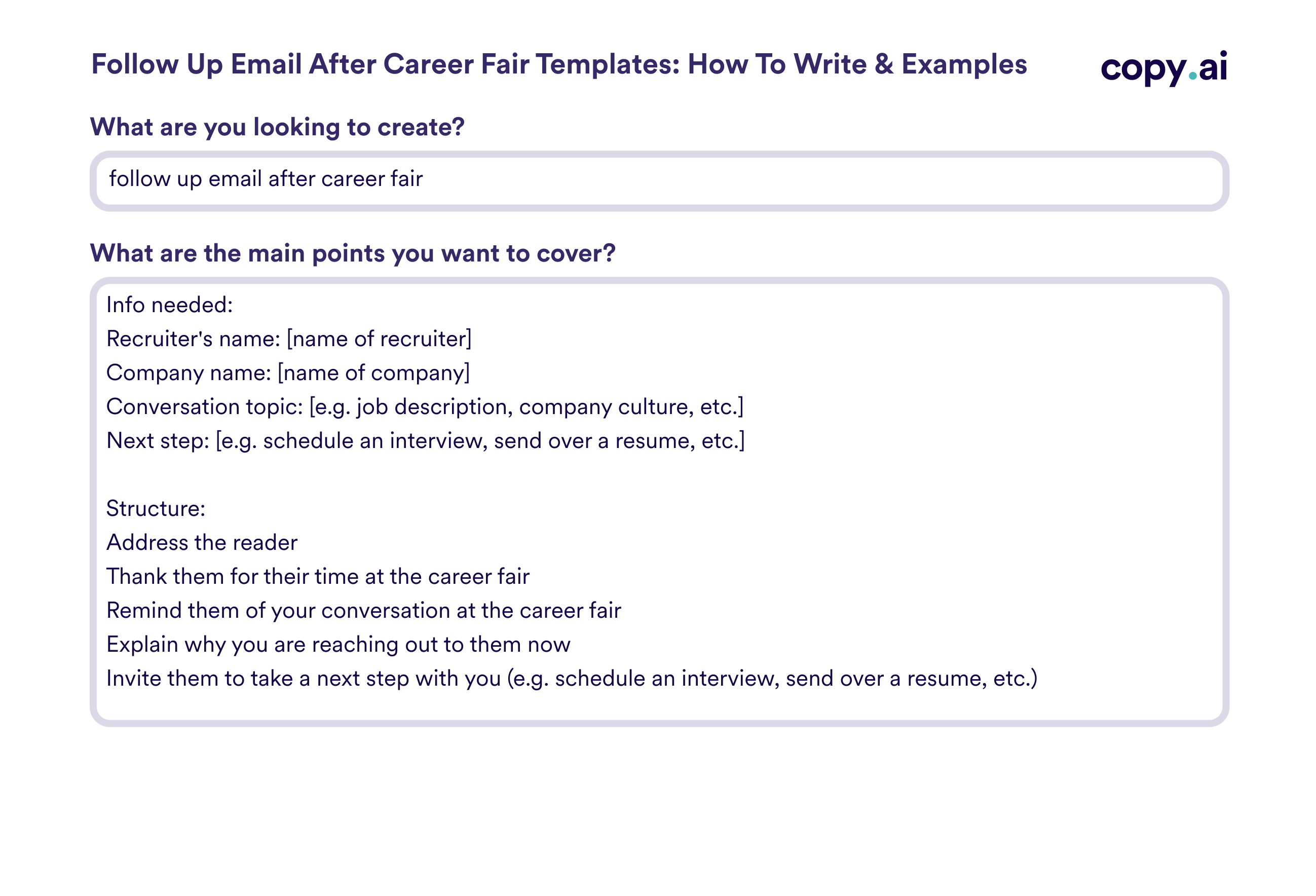 Follow Up Email After Career Fair Templates: How To Write & Examples 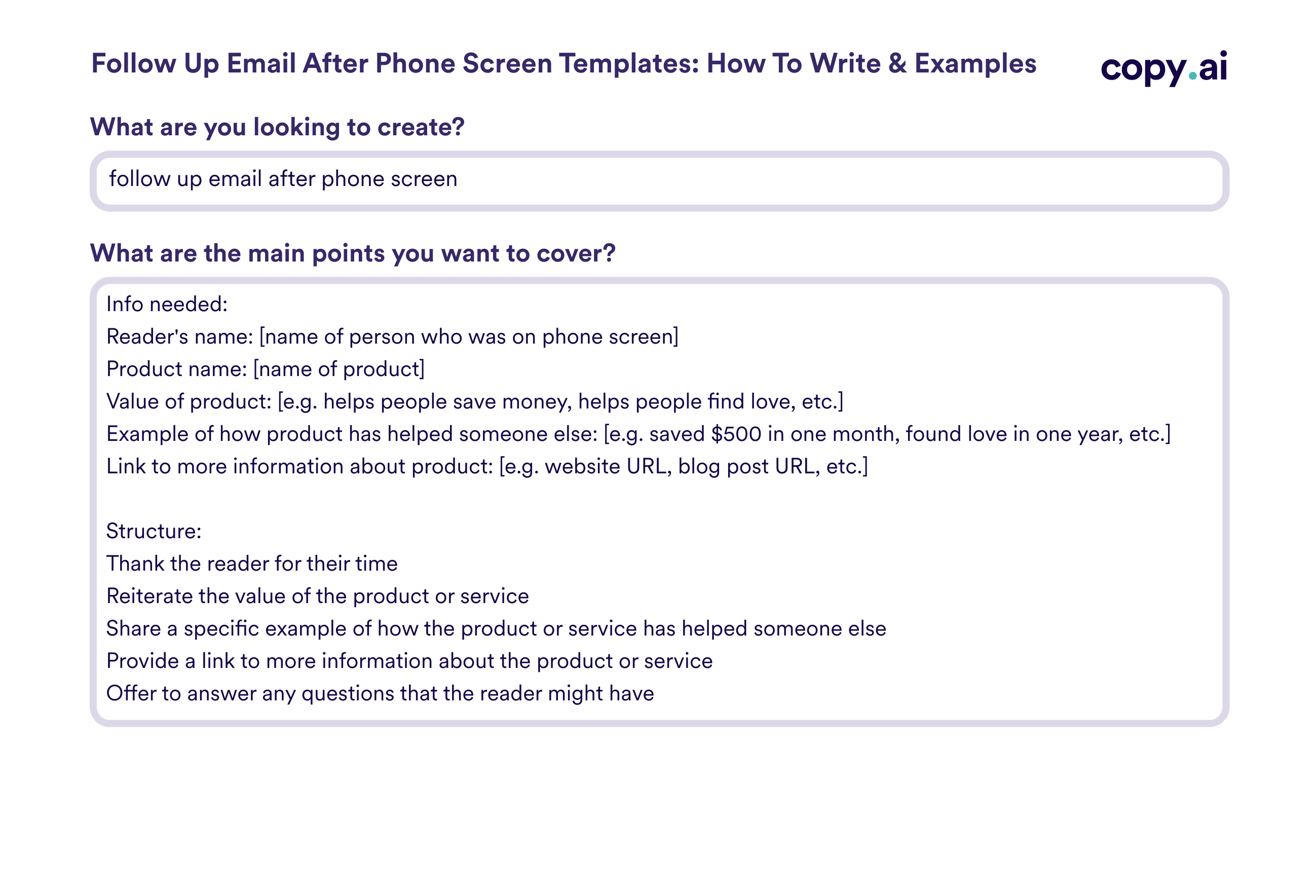 Follow Up Email After Phone Screen Templates: How To Write & Examples 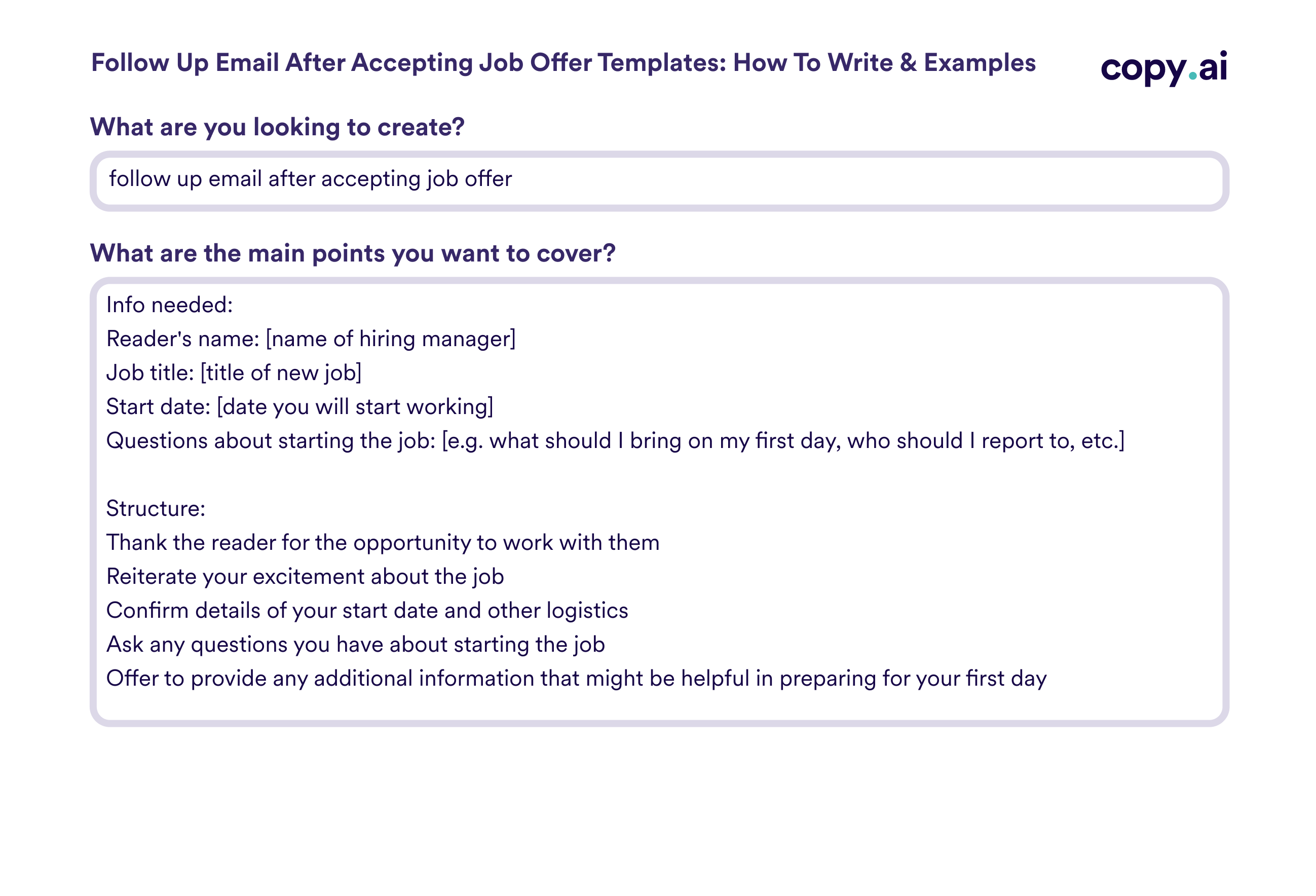 Follow Up Email After Accepting Job Offer Templates: How To Write & Examples 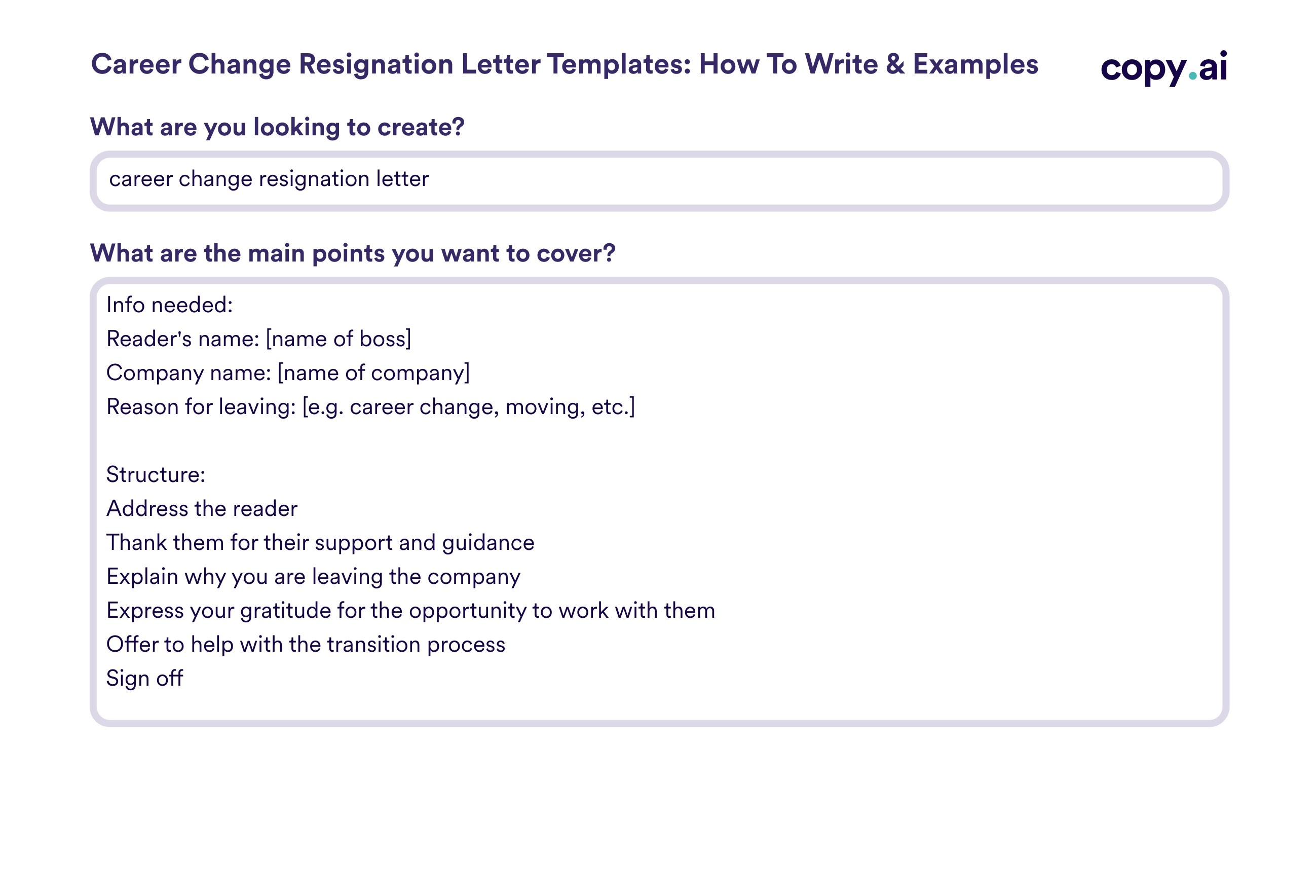 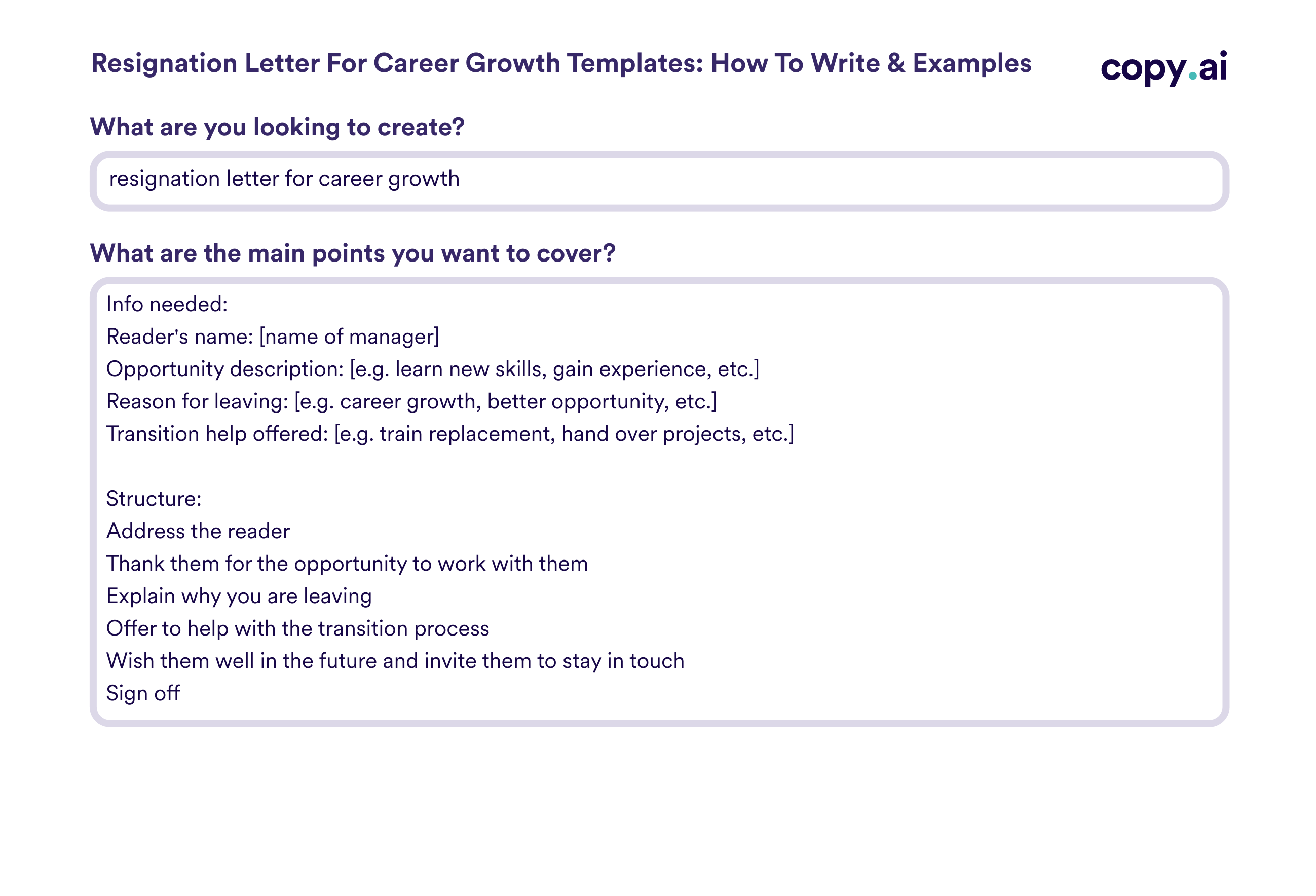 Resignation Letter For Career Growth Templates: How To Write & Examples 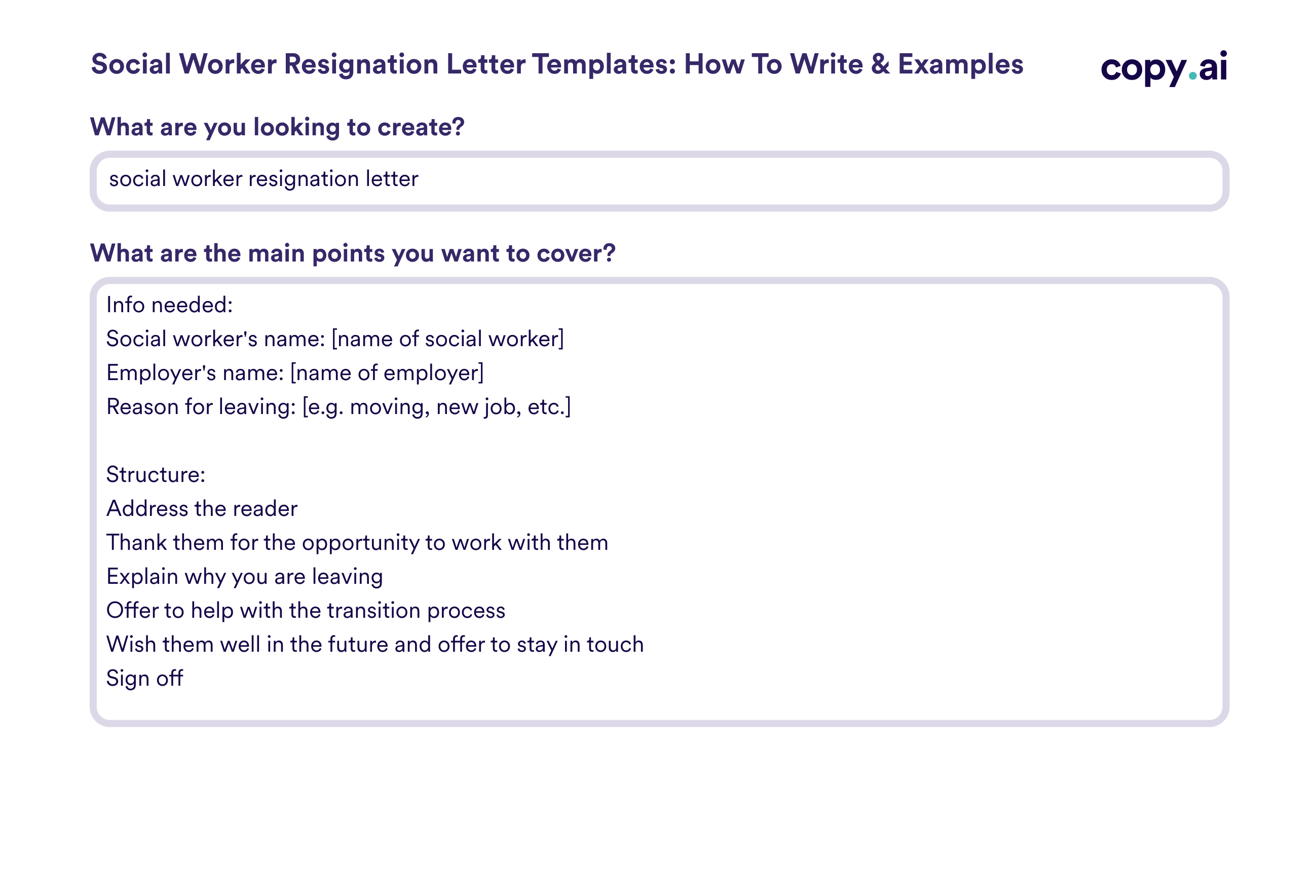 1
Enter what you need to write
Choose from emails, social posts, long-form blog posts, and more!

2
Give Copy.ai a bit of context
Enter a few sentences about your project/campaign. 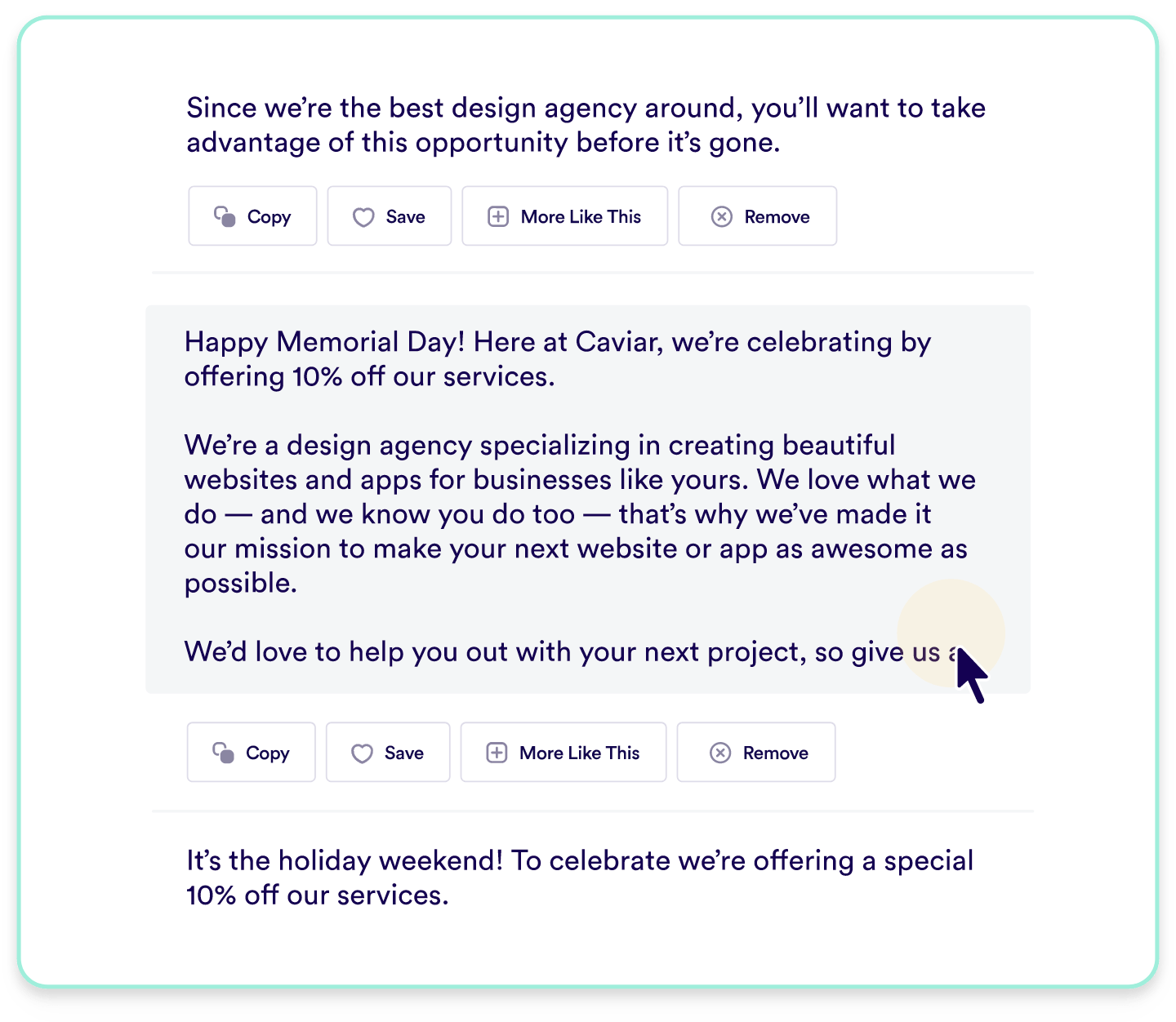 3
Sift through the results
Our AI content generator gives you multiple options for each campaign that you’re working on.

4
Edit, polish, and publish
Use Copy.ai’s editor to rewrite paragraphs and polish up sentences. Then, just copy and paste the work wherever you need it.